A modern, web-based photo management server. Run it on your home server and it will let you find the right photo from your collection on any device. Smart filtering is made possible by object recognition, face recognition, location awareness, color analysis and other ML algorithms.

Based on the "Photo and Video Galleries" category.
Alternatively, view Photonix alternatives based on common mentions on social networks and blogs.

Scout APM is great for developers who want to find and fix performance issues in their applications. With Scout, we'll take care of the bugs so you can focus on building great things 🚀.
Promo scoutapm.com

Do you think we are missing an alternative of Photonix or a related project?

This is a photo management application based on web technologies. Run it on your home server and it will let you find what you want from your photo collection using any device. Smart filtering is made possible automatically by object recognition, location awareness, color analysis and other algorithms. 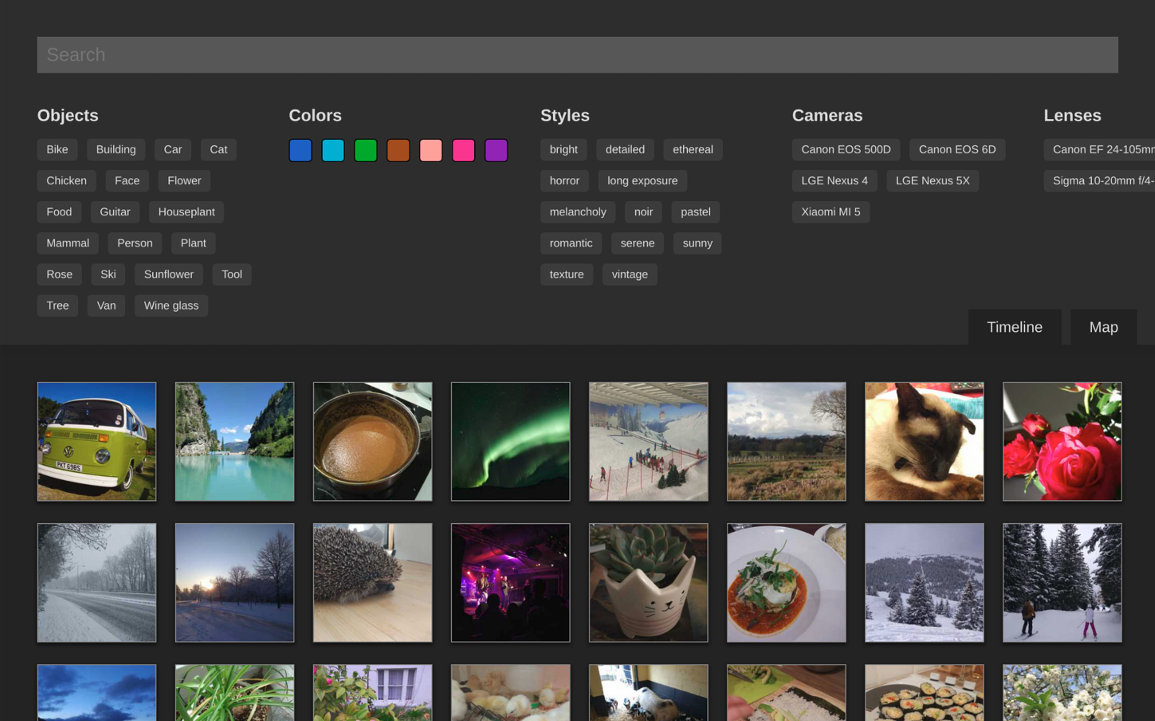 This project is currently in development and not feature complete for a version 1.0 yet. If you don't mind putting up with broken parts or want to help out, run the Docker image and give it a go. I'd love for other contributors to get involved.

Please join in the discussion and help us gain visibility by following us on social media. Much appreciated :)

If you get value from Photonix or like where we're heading then we'd really appreciate it if you considered sponsoring us on a monthly basis.

The easiest way to run it is with Docker Compose using the pre-built image following these steps.

Create a new directory to run inside and download the example Docker Compose file.

Make volume directories for data stored outside the container.

Bring up Docker Compose which will pull and run the required Docker images.

A few seconds after starting you should be able to go to http://localhost:8888/ in your browser.

You'll need to create a username, password and library. Right now this needs to be done on the command-line so run this in a new terminal window. Replace USERNAME with your own username.

You can move some photos into the folder data/photos and they should get detected and imported immediately. Once you have finished trying out the system you can edit the volume in the docker-compose.yml file where it says ./data/photos to mount wherever you usually keep photos. System database, thumbnails and other cache data is stored separately from the photos so shouldn't pollute the area. You are responsible for keeping your own backups in case of error.

If you are using the pre-built Docker image you can use kill, pull and bring back up using the following:

There is a [Makefile](./Makefile) and separate Docker Compose file docker-compose.dev.yml that you should use if you want to work on the project. Check out the repo and this setup will build the image, mount the code as volumes, hot-reload JS changes to the browser and reload the Python server for most changes.

If you get errors such as Error starting userland proxy: listen tcp 0.0.0.0:5432: bind: address alerady in use then you probably have an existing server such as Postgres listening on the standard port. You can change Photonix's services to use alternative port numbers by editing docker/docker-compose.dev.yml and setting '5432:5432' to be '5433:5432' for example. This is for Postgres but is it a similar solution for Redis or the webserver ports.

If you want to access the Bash or Python shells for development, you can use the following command.

PyTest is used as a test runner and for creating fixtures. The easiest way to run the tests is within the Docker container like this:


*Note that all licence references and agreements mentioned in the Photonix README section above are relevant to that project's source code only.